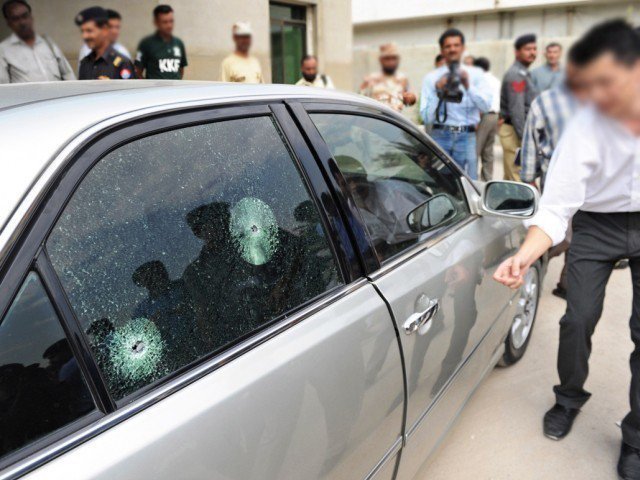 Police has acquired the mobile phone data of Chen Zhu, the Chinese national who was shot dead in broad daylight in the city’s upscale neighbourhood, Express News reported.

The incident took place on Monday near Zamzama Park. As per the statement issued by South Zone police station, Zhu, 46, was employed at a private shipping firm in Karachi.

He and his coworker Ye Fan, another Chinese national, had left their office for lunch at a restaurant in Block-2 Clifton. They were in a white Honda when an unidentified assailant opened fire at them, leaving Zhu critically injured.
Chinese national shot dead in Karachi

Both Chinese nationals were shifted to the Jinnah Postgraduate Medical Centre where Zhu succumbed to his injuries.

Making headway, the police investigators have begun geo-fencing the area where the attack took place. Police sources also revealed details of the forensic report, saying the 9mm pistol recovered from the crime scene had never been used before.

“We are getting details of the route of the victims with the help of a tracker installed in his car,” said District South police chief SSP Javed Akbar Riaz. “We are also looking for the CCTV footage of the entire area as well as looking for the victim’s call record.”

SSP Riaz further said that the case was being investigated from different angles, including business concerns and personal enmity.

The nuances of CPEC

The slain Chinese national’s body is stored in a morgue until the completion of the investigation, following which it will be flown to China.

Zhu was a resident of Lalazar Drive on the Beach Luxury Hotel Road where the company’s office is also located. He was serving as the managing director of the company since the last two years.

Following the incident, security has been tightened for foreigners, particularly Chinese nationals across the province. Hundreds of Chinese citizens are working in Pakistan as part of projects in CPEC project while over 4,000 police personnel have been deployed on their security.