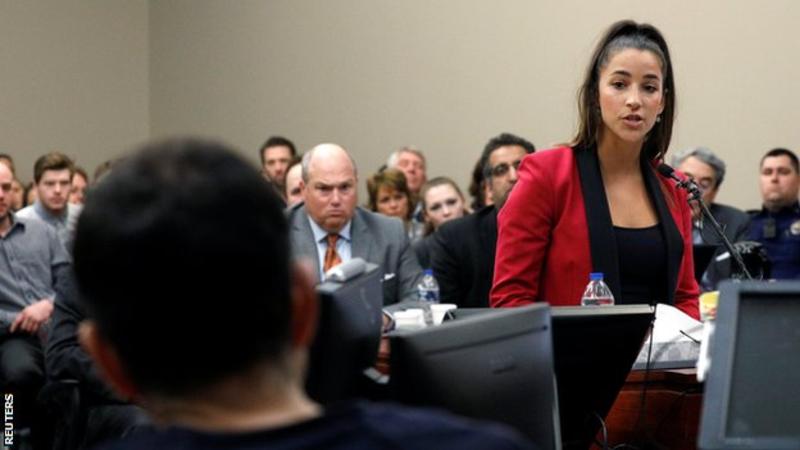 Raisman also criticised the United States Olympic Committee for acting “like none of us were ever abused”.

On Sunday, three members of the USA Gymnastics (USAG) board of directors resigned in the wake of the scandal.

A statement from USOC chief executive Scott Blackmun, following the resignations, read: “New board leadership is necessary because the current leaders have been focused on establishing that they did nothing wrong.

“USA Gymnastics needs to focus on supporting the brave survivors.

“The Olympic family failed these athletes and we must continue to take every step necessary to ensure this never happens again.”

Nassar is to be sentenced this week and the judge has allowed many of his victims, including Raisman, to address him in court.

Raisman won team and floor gold at London 2012 and team gold at the 2016 Rio Games. She also has two Olympic silver medals and one bronze from those Games.

In response to the USOC statement, Raisman said: “For the past week, survivors came forward to share their painful stories.

“Many of them, myself included, claim the USOC is also at fault. Was the USOC there to ‘focus on supporting the brave survivors’? No.

“Over the weekend, the USOC released a statement shamelessly taking credit for a few USAG resignations (note: not fired), as though they’re addressing the problem.

“But they are still not acknowledging its own role in this mess. Zero accountability. It’s like none of us were ever abused.”

She added: “Independent investigation! What’s it going to take for you to do the right thing?”

Telecommunications company AT&T has suspended its sponsorship deal with USAG because of the sexual abuse scandal.

In a statement, the company said it was pulling out of its deal “until it (USAG) is re-built and we know that the athletes are in a safe environment”.

“The terrible abuse suffered by these young women is unconscionable,” added the statement. “We remain committed to helping these young athletes pursue their dreams and hope to find other ways to do so.

“We stand ready to step back in when USAG has fully addressed these tragic events.”

Two other sponsors, Hershey Co and Under Armour, have let their deals lapse, while Procter & Gamble has said it would “evaluate” whether to negotiate another sponsorship deal.